Voicing the Political: The polyvocal is political

This study session presents two film screenings: Emma Wolukau-Wanambwa’s Promised Lands (2015, 20’) and Lis Rhodes’ Pictures on Pink Paper (1982, 35’). A short talk by Sarah Hayden will probe how the two films use polyvocality and the written word to create ambiguity within political work. The discussion will be prompted by short statements from some of the most vivid and provocative theorists of voice today: Adriana Cavarero, Nina Sun Eidsheim, Brandon LaBelle and Norie Neumark.

This season’s study sessions address vocality as a phenomenon at the confluence of embodiment and technicity, the individual and the collective, interior and exterior, sound and sense. Each session will comprise screenings, collective readings, and listening experiments. By discussing language-based artistic and literary practices, we will work together to interrogate the politics of how voice is used, represented, imagined and heard.

Voicing the Political has been programmed as part of Voices in the Gallery, an AHRC-funded research project, led by Sarah Hayden at the University of Southampton in conjunction with John Hansard Gallery and Nottingham Contemporary. The event is part of a series of discussions about the materiality of text and of the speaking voice in contemporary moving image.

Sarah Hayden is Associate Professor at the University of Southampton, where she directs the Centre for Modern and Contemporary Writing and leads the AHRC ‘Voices in the Gallery’ project, (2019-2021). 'Voices in the Gallery' investigates the voiceover as a phenomenon that exists simultaneously as art-form, literary genre and sonic intervention in the contemporary gallery space. She is the author of the books, Curious Disciplines: Mina Loy and Avant-Garde Artisthood and Peter Roehr–Field Pulsations (jointly authored with Paul Hegarty), as well as various articles, chapters, poems and chapbooks.

Emma Wolukau-Wanambwa is an artist and doctoral candidate in Fine Art at the University of Bergen, Norway as well as Convener of the Africa Cluster of the Another Roadmap School. Wolukau-Wanambwa works in a wide range of media, formats and contexts. Recent exhibitions include Bergen Assembly 2019; 62nd BFI London Film Festival; The Showroom, London; Museum of Modern Art, Warsaw; 10th Berlin Biennale of Contemporary Art; National Gallery of Zimbabwe; Makerere University Art Gallery; and Kunsthalle Bremen. Her essay, “Words Words Words”, is published in the exhibition catalogue Lis Rhodes: Dissident Lines by Nottingham Contemporary and the Palais de Tokyo.

Voicing the Political: The polyvocal is political 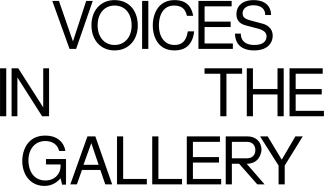